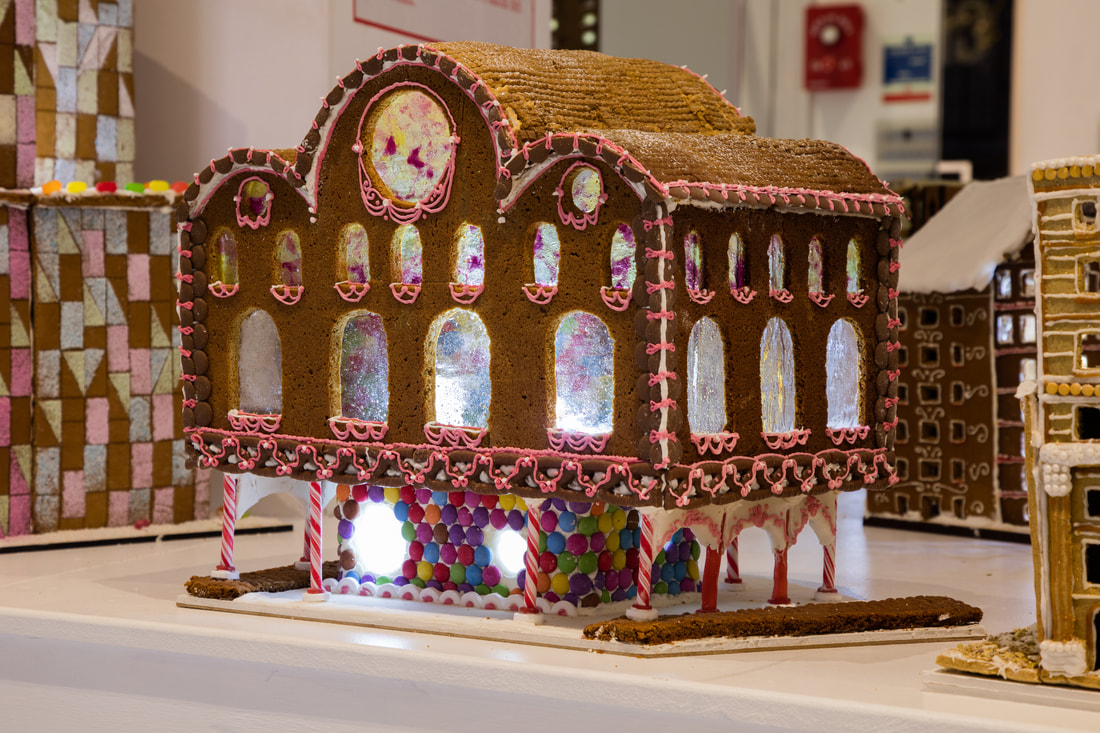 Stained Glass Windows in Gingerbread Houses bring them to life in such a colourful way. See below for a variety of tips and tricks as well as a short history on the history of stained glass windows!

A Short History of Stained-Glass Windows
by Jessie Buckle

​Stained-glass has been designed and produced since the Ancient times. Both the Egyptians and Romans manufactured small glass products, such as tableware and vases. However, Historians find difficulty in pinpointing the origins of when the technique was implemented into architecture. Often, it is suggested that the technique developed from jewellery and mosaic design.

Stained-glass windows, as we know them, appeared to emerge through the substantial construction of churches and cathedrals. Evidence of stained-glass windows have been documented in British monasteries since the 7th Century, the earliest known reference being 675 AD. From the 10th Century, biblical scenes were displayed within stained-glass designs in churches, located in England, Spain, Germany and France.
Stained-glass windows massively peaked in popularity during the middle ages. Due to the illustrative portrayal of the bible and the introduction of mass printing. The Romanesque and early Gothic period witnessed the construction of flamboyant cathedrals and churches, engineered to be taller and lighter than ever before. The extravagant window arches, required large expanses of stained-glass. During this era, Artists tended to combine many pieces of stained-glass together with lead, in order to create extremely intricate and complex designs. For example; illustrations of stories extracted from the bible, as well as the lives of Saints. The windows created a magical ambience of light and colour, within the buildings they resided.
​
The 15th Century saw an alteration of how stained-glass was made and viewed. The style massively evolved from Gothic to Classical. The Classical style, which lasted around 300 years, portrayed stained-glass as a sophisticated, translucent picture, incorporating softer colours and larger figures. Lead lines were considered an obstruction, rather than a decorative item. Removing such features associated with stained glass, removed the glory, atmosphere and symbolism, stained-glass initially strived to achieve. However, it was during this period that stained-glass became prominent in public buildings and private residencies.

​Due to the revival of the Catholic Church in England in the 1800’s, a resurgence of Gothic architecture was born. Thus, new churches and cathedrals were constructed, as well as those remaining being restored to their former glory. This resulted with the rediscovery of medieval stained-glass techniques and an extremely high demand for stained-glass produced in this style. 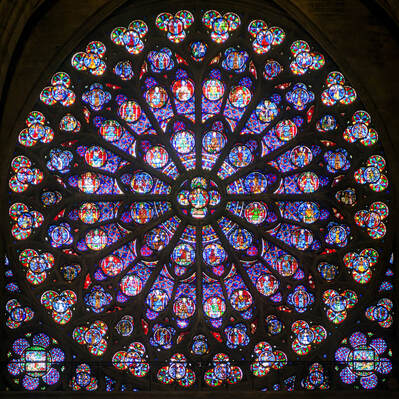 Rose stained glass window in cathedral of Notre Dame, Paris, France
After World War 1, again the tastes in stained-glass changed, due to a revival of architectural accuracy. This ignited a demand for Gothic style stained-glass windows in Neo-Gothic Churches. The popularity of Opalescent glass then declined following the death of stained-glass Artists,

John La Farge in 1910 and Louis Comfort Tiffany in 1933. During this time, the Abstract and Expressionist Art Movement influenced artists to explore expression within the glass medium. This encouraged new and imaginative styles to emerge and a new golden age of glass design, influenced by developing technologies.

Tiffany style lamps are features within homes, as well as stained-glass doorways and windows. Artists continue to develop and combine existing styles, creating beautiful and unique pieces every day. Even in Gingerbread Houses!
Reference: https://www.stainedleadedglass.co.uk/the-history-of-stained-glass.html#